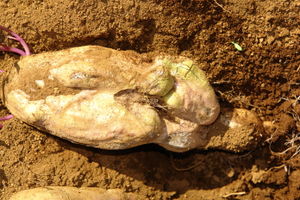 This is a wide-spread, semi-endoparasitic nematode found in tropical and subtropical regions. It infects a large variety of crops. High nematode populations result in substantial yield losses. Economic damage has been reported, for example, on soybean, cotton, pineapple, banana and sweet potatoes. Affected crops often show stunting. Reduction of cotton yield by 50% is not unusual. In addition, it can create entry points for secondary infections by other plant diseases like Fusarium and Verticillium wilts.

After hatching from the egg as J2 juvenile, it takes 1-2 weeks for the vermiform female to become infective. At this stage, the female is about 0.3-0.5 millimeters long and very slender. It pierces the root of a host plant, but enters the root only partly and stimulates it to form a special feeding structure called a syncytium. It then becomes thick and kidney-shaped during maturation, with most parts of its body remaining outside the root. Males do not feed or damage the roots. The life cycle from egg to egg lasts around 3 weeks.

The nematode can survive without water for at least 2 year by going into a dehydrated resting stage. It spreads mainly by farming machinery and vehicles contaminated with infested soil. For management, the use of nematicides (e.g. as seed treatment), crop rotation or a fallow period are recommended (e.g. see Moore and Lawrence, 2012). The development of resistant cultivars is in progress.