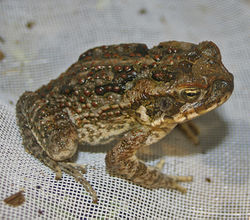 The toad is native to South America and has been introduced into several countries as a biological control agent against insect pests. It has become an ecological pest, especially in Australia. The ecological impact ranges from competition with native amphibians to lethal toxic ingestion by predators like large lizards, snakes and crocodiles. As a defense, the toad excretes a milky-white liquid which is highly toxic.

The toad has been introduced into various tropical countries, but the introduction into Australia has caused the greatest concerns. Large-scale releases were made in Queensland, starting 1935, against the cane beetle Dermolepida albohirtum. Subsequently, it spread south to New South Wales and west to the Northern Territory as well as Western Australia. Its range in Australia is still expanding.

Apart from arthropods, its diet includes small vertebrates and even plants. The toad is terrestrial and breeds in fresh water only. The development from egg, through the tadpole stage, to the land-living toad stage lasts around a month. Female adults are larger than males and can reach a length of 10-15 cm. The toad is dark brown dorsally and cream coloured ventrally. It can live for 10-15 years.