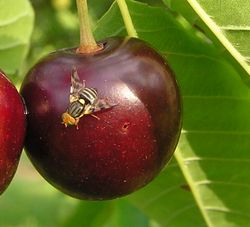 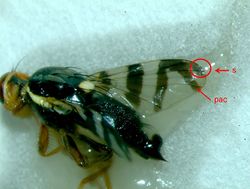 The fruit fly is native to the eastern parts of North America and attacks cherry fruits and the fruits of several other Prunus species. It has invaded Europe (first record in 1983 from Switzerland) and is now found mainly in south European countries. Its size, appearance and biology is similar to that of the European cherry fruit fly, Rhagoletis cerasi. However, it is adapted to a slightly warmer environment and in central Europe it emerges in late spring, about a month later than R. cerasi. For details on the biology and management of this species see Rhagoletis cerasi.

R. cingulata can be distinguished from R. cerasi by the pattern of bands on the wing, in particular:
• the accessory costal crossband is missing, and
• the band at the wing tip splits into 2 bands.
R. cingulata is also very similar to Rhagoletis indifferens and both species can be easily confused.