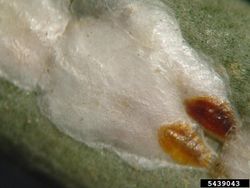 This genus contains around 70 species of armored scale insects. They are typically polyphagous and found in various regions. Many species have been described from Asia. Several are important agricultural pests like the white peach scale, Pseudaulacaspis pentagona, which infests fruit trees and other crops.

The scale cover is usually white or greyish and has a circular, elliptical or pyriform outline with terminal exuviae. The genus is characterized by a number of morphological features like the structure of the pygidium or the position of the spines and ducts.