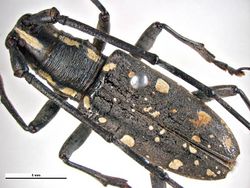 The beetle attacks plants of the family Moraceae and is a serious pest of mulberry and fig trees in eastern Asia. It has been recorded from the U.K. since 1997 and from Italy since 2005. It was also intercepted repeatedly from North America. The larvae bore into the trunks of the host trees and the adults feed on the leaves.

There are 1-2 generations per year. In Japan different populations can have different life cycles. In western parts of Honshu Island, there are typically 2 breeding cycles per year with adults being abundant in May to June and again in August to September. The larvae of the second brood overwinter.

In eastern parts of Honshu Island, adults are abundant in July to September and there is only one breeding cycle per year. Here the eggs are the overwintering stage.