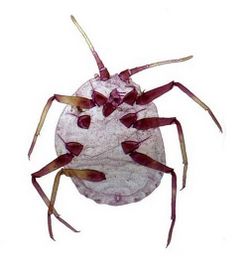 This scale insect is native to South and Central America, and has been reported from West Africa since the early 2000s. It is polyphagous, but economic damage has been most often reported from citrus plantations in southern Brazil. Apart from direct feeding damage, the insect creates abundant sooty moulds. Ornamental trees, like the orchid tree (Bauhinia variegata) can be also seriously damaged, up to tree death (Lemes et al., 2019).