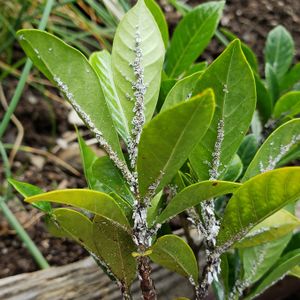 This family of scale insects is part of the soft scales (Coccoidea), and includes around 200 species that live on a variety of plants. They are characterised by having distinctive, well-developed legs and antennae, and by being covered with abundant white wax secretions.

The 2 species listed below are regarded as crop pests. They are polyphagous and have invaded countries outside their native range. For example, Praelongorthezia praelonga is native to South and Central America. It can cause serious damage to citrus plantations in southern Brazil, and feeds on many other plants. It has been also reported from West Africa since the early 2000s.

The following genera and species are currently entered under Ortheziidae: