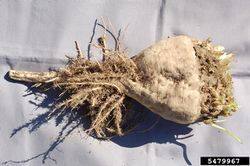 This species of slime molds is widespread and the vector of several plant viruses, in particular Beet necrotic yellow vein virus, the causal agent of rhizomania of sugar beet. The pathogen is a single-celled organism which has been placed with the fungi or the protozoa. It infects beet roots, but does not cause any symptoms by itself. It can also infect related plant species. It disperses mainly through the transfer of contaminated soil, e.g. with farm machinery or soil attached to other root crops. Wet soil also promotes the spread of the disease. Control involves resistant cultivars, placing infected fields under quarantine and good drainage.

The resting spores which may contain the virus can persist in the soil for several decades. Under favorable conditions (wet soil and warm temperatures), each resting spore will release one primary zoospore which can infect a beet plant. The pathogen then develops a plasmodium which either becomes a zoosporangium, producing secondary zoospores (these are dispersed by water and infect other plants), or the plasmodium forms resting spores in so called sporosori. The latter are irregular in shape and approximately 30-80 µm large. The resting spores are spherical with a diameter of around 4 µm.