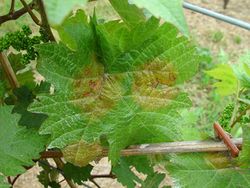 The oomycete causes an important disease of grapevine. It is believed to be native to North America but now has a world-wide distribution. It was first recorded from Europe in 1878. Yield and quality of the grapes are significantly reduced and infections can result in almost total loss of the harvest. The disease caused destructive epidemics in Europe before and during World War II.

The pathogen survives as oospores in fallen leaves or the soil for several years. Oospores mature during the winter. In spring, each germinating oospore forms a sporangium which then produces zoospores. The zoospores infect leaves through the stomata. Infected leaves develop yellowish "oil spots" on the upper surface. During moist conditions, infected leaves produce mycelia on the lower surface which form asexual sporangia. These disperse through rain splashes and release infective zoospores. Young berries might also be covered by mycelia. Older berries become bluish, shrivel and drop.

The correct timing of fungicide treatment is important and growers are usually advised by the local plant protection service of the best application schedule.