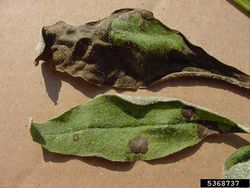 The oomycete is wide-soread and causes one of the most important diseases of sunflower. It also infects some other Asteraceae. The pathogen persists between seasons in the soil as oospores, in seeds and in weeds. Oospores do not germinate but produce a sporangium and zoospores in spring. These migrate to roots, form cysts which then germinate and infect the roots. 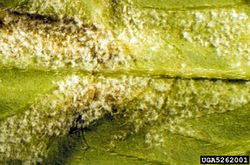 Symptoms include stunting, bleaching and chlorotic mottling. Young leaves may be severely affected by chlorosis and become deformed. Seedlings show damping-off symptoms. Few seeds are produced and plants often die at the seedling stage or before forming seed heads. Yield losses of up to 50% (sometimes more) have been reported.

Infected leaves produce mycelia on the lower surface which form asexual zoosporangia. These disperse by wind, rain splashes and through irrigation water. The zoosporangia release infective zoospores. Durable oospores are sexually produced and can survive in the soil for 5-10 years.

Management involves crop rotation with a non-host, resistant cultivars, the use of disease-free seeds or seed treatment with fungicides. Fungicide resistance and break-down of plant resistance has been reported.