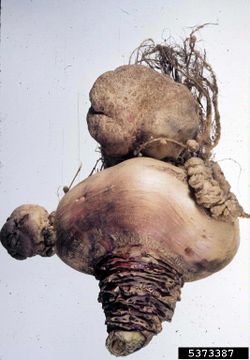 The species belongs to the group of "slime moulds" and is an important soil-borne pathogen of crucifers like cabbage or rape/canola which is widespread in temperate regions and on soils with a low pH. It causes deformations of the roots (galls or clubs), leading to a significant decrease in yield and crop quality. Crop losses can exceed 50%. Above-ground symptoms include chlorosis, stunting and wilting. Resting spores are released into the soil during the decay of infected tissue where they can survive for many years. 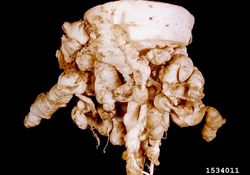 The disease spreads via drainage water, wind and soil attached to farm equipment, possibly also through seeds contaminated with soil containing resting spores. For some crops, resistant cultivars are available. However, resistance break-down has been a problem in some areas. Crop rotation is recommended. Bait crops (crops that induce germination of the resting spores without becoming infected) are also being explored.

Under warm and moist conditions, plants become infected by zoospores which are release by the resting spores. These zoospores are flagellate, mobile, spindle-shaped and 3-6 µm long. They attach themselves to a root hair, form a cyst and enter the root as amoeboid cells. Inside the root, they develop into multinuclear plasmodia and later zoosporangia which produce secondary zoospores.

The new generation of zoospores infects new root cells or they fuse as pairs and start the formation of new thick-walled resting spores which are approximately 4 µm large.