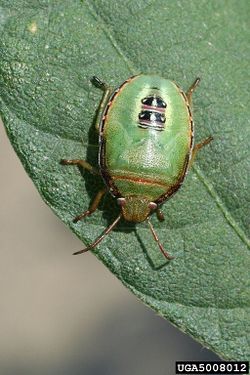 The stink bug is found in the Americas from Argentina to the southern United Sates and feeds on the pods of legumes like soybean, alfalfa or pigeon pea. It is particular important in South American soybean fields and has also become more common in North America. The bug attacks the developing pods and inserts its stylet directly into the young seeds. The pods then become deformed or infected by fungi. Other plants like radish or lupin may also be attacked.

The life cycle from egg, through 5 nymphal stages, to adult lasts around 6 weeks. There are 5-8 generations per year. Control by insecticides is difficult and requires repeated applications of broad-spectrum pesticides. Development of resistant soybean cultivars is in progress.

The adult is 8-10 mm long, green with a transverse, horizontal band across the posterior part of the pronotum. Nymphs have a characteristic black mark on the abdomen containing white dots.