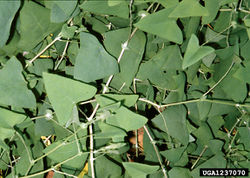 This fast growing and climbing vine is native to eastern Asia as well as to eastern parts of western Asia. It is mainly found in areas with a temperate climate. The weed has been accidentally introduced into eastern North America during the 1930s and has been also reported from parts of Turkey. In the invaded regions, it has spread to forested and open areas, climbing up and covering trees and other plants. It some areas it has formed dense monocultures. The growth of overgrown trees is suppressed and the vine might even kill the plants it covers.

The weed can grow up to 15 cm per day. The stems are highly branched and are covered with small curved spines. The plant forms large, leaf-like structures around the stems as well as small flowers. The fruits are initially green, turning blue later in the season. They are eaten by birds which disperse the seeds, the main dispersal mode for the plant.