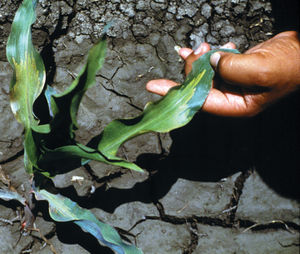 maize plant with symptoms of infection by Peronosclerospora sorghi (click on image to enlarge it)
Authors: CIMMYT
Source: Flickr

This oomycete is widespread and causes downy mildew disease on sorghum and maize. It was first described from Africa and Asia and might have been introduced into America during the 1950s. Yield losses can approach and sometimes exceed 50%.

The soil-borne oospores survive for several years and can infect germinating seedlings resulting in chlorosis. These produce asexual sporangia which then infect neighbouring plants. At the end of the season, durable oospores are formed again. Management options include crop rotation, deep ploughing, early planting and resistant cultivars.