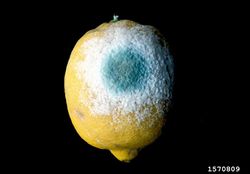 The fungus has a world-wide distribution in citrus growing regions and causes post harvest green mold on citrus. It is responsible for most post-harvest losses of citrus. Typically around 10% of the fruits are lost due to infections of P. digitatum and the related pathogen Penicillium italicum. However, these losses can reach 50%. The fungus enters the fruits through small wounds during harvesting, transport or storage.

The symptoms on infected citrus fruits are circular white colonies developing on the surface which become green at the centre. These are similar to those of P. italicum. However both species differ in their optimal temperature range which is 20-25°C for P. digitatum (5-10°C for P. italicum). In direct comparison colonies of P. digitatum are more olive-green (those of P. italicum more blueish-green).

Recommendations for management include the removal of infected fruits from the orchards and avoiding injuries during harvest. Post-harvest fungicide treatments are commonly used. However, several strains of P. digitatum have developed resistance against specific fungicides. Some citrus cultivars have a degree of resistance against this fungus.

The fungus shows clear morphological differences to other Penicillium species. The conidiophores are characterized by their variable lengths in the same culture and the conidia are cylindrical to elliptical (more spherical in other species).