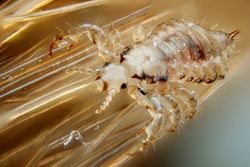 The lice feed on the human scalp by injuring the skin and sucking blood, causing irritation which may lead to secondary bacterial infections (e.g. by Staphylococcus aureus). Allergic reactions can also develop. The insect can further transmit several diseases, like louse-borne relapsing fever (Borrelia recurrentis) or louse-borne typhus (Rickettsia prowazeki ).

Many million people, especially children are affected by lice. In the United States alone, the overall annual costs of control as well as medical treatments have been estimated at around 1 billion US$. Head lice spreads through direct contact, e.g. among children in school. The claw-like legs are well adapted to holding on to and moving along hairs.

Many types of treatments like shampoos are available against head lice. However, these often do not remove or kill the egg stage. Therefore, 3 treatments at intervals of 1 week are recommended to control any nymphs which might have hatched from eggs after the first treatment (Burgess, 2014).

The adult is about 2½-3 mm long. The life cycle from egg, through 3 nymphal stages to mature adult lasts around 2-3 weeks. The body louse (Pediculus humanus humanus) is found on other parts of the body and is slightly larger. It often hides in clothes and is also called "clothing louse".