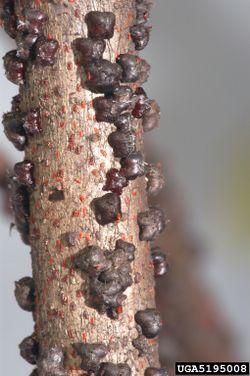 This species of lac insect is believed to be native to Southeast Asia and invasive in North and Central America. It was first recorded from Florida in 1999 and was initially called Paratachardina lobata (a synonym of Paratachardina silvestrii). It was subsequently described as a new species, see Kondo and Gullan, 2007. It is a polyphagous pest of woody plants and has spread to other parts of North and Central America, including some Caribbean islands, as well as to Hawaii (first record 2012).

The females reproduce parthenogenically and can form dense colonies on the stems and branches of their host plants. Leaves are also colonized. The infestations result in dieback of affected twigs and branches, thinning of the foliage, and sometimes plant death. In addition, sooty mould grows on infested leaves. The mature scale is around 2 mm wide with an irregular, often x-shaped outline and a dark brown colour.