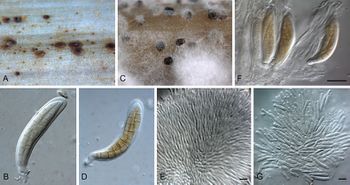 This fungus is widespread causing Septoria nodorum blotch, an important wheat disease. Yield losses of 20-30% have been estimated in some years. Other cereals and grasses can also become infected. Elongated lesions without distinct borders develop on wheat leaves. They later contain small black pycnidia. When the ears develop, greyish and brownish areas appear on the glumes and the awns. The kernels of infected ears are small and shriveled.

Crop rotation is recommended as main management strategy. The use of fungicides may be profitable if wheat is grown continuously in the same field. Some progress has been also made on developing resistant cultivars.