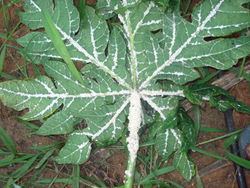 The mealybug is a polyphagous pest, found in tropical and subtropical regions. It is apparently native to Mexico and/or Central America and has spread to the Caribbean and to Florida in the 1990s. Since then, it has also invaded several Pacific islands, Indonesia, parts of Africa, India and other countries of south-eastern Asia. The host plants include various fruit trees, vegetables as well as ornamental plants.

Severe infestations can cause chlorosis, stunting, leaf deformation and early dropping of the leaves and fruits. Death of the host plant may also be the result of heavy attacks. The market value of the fruits and crops is reduced by the feeding damage, the accumulation of honeydew, and the cover of wax filaments from the mealy bugs.

The adult female is pale yellowish, oval in shape, between 2 and 3 mm long and about 1½ mm wide, densely covered with wax filaments. It can be recognized by a number of morphological features like the 8-segmented antennae or the arrangements of pores along the margin (see illustrations below). However, an identification by the DNA structure is more reliable.

For details see the literature (box top left) and the respective page in Wikipedia.