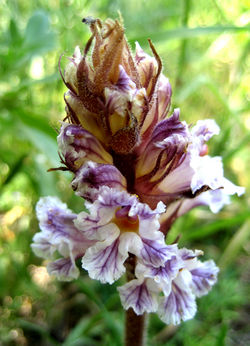 This parasitic weed is mainly found in the Mediterranean region. It has been also reported from other countries in Europe, western Asia and northern Africa. It infests predominantly leguminous crops, but other crops like carrots or tomatoes can be also parasitized.

Infestations can be serious, leading to the abandonment of legume crops in affected areas, due to the long persistence of O. crenata seeds in the soil. Management options are limited and current research focuses on the development of resistant cultivars of the main host plants.