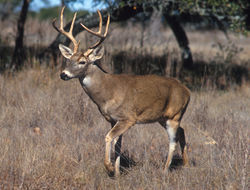 This deer is common in eastern parts of North America and in Central America. It may intrude into agricultural areas or airports and can also threaten native forest plants when populations reach a high density. In addition, it is a reservoir of ticks like the cattle tick and harbors tick-transmitted livestock and human diseases like Ehrlichia, Rickettsia and Borrelia.

In parts of North America, populations of white-tailed deer have increased considerably over the years, due to the absence of traditional predators, such as mountain lions (Puma concolor) and timber wolves (Canis lupus). The impact of sterilization and recreational hunting has not been sufficient to control the populations (Blossey et al., 2019).