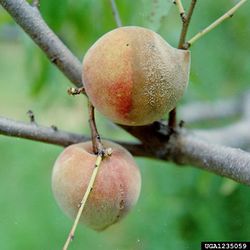 The fungus causes the economically important disease American brown rot on peach and other stone fruits in many regions. Losses can exceed 50%. Rosaceae, mainly Prunus species, are the main host plants, apples and pears are infected to a lesser extent. Often, it is also a storage problem. Already green fruits may become infected, with the disease remaining dormant until the fruits are mature or in storage. Apart from fruit rot, the fungus can cause blossom blight, twig or leaf blight, and twig canker. The fungus overwinters in mummified fruits which produce condidia and apothecia.

The conidia are lemon-shaped, measure about 15 x 10 µm and are dispersed by the wind. Apothecia are not common. They are cup-like structures, about 10-20 mm large, which produce the sexual ascospores. These are released during rainfall and infect blossoms. The use of fungicides is the main control method, but has resulted in widespread resistance. Sanitation (removal of infected fruits) is recommended. Resistant varieties and biological control methods are under development.