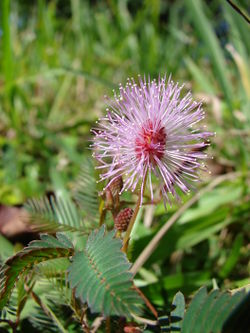 The genus of Mimosa contains around 700 species of leguminous herbs and shrubs, that are found in the neotropics and in other regions. A number of species have spread to other tropical and subtropical areas outside their native range and have become important agricultural and environmental weeds. These include, for example Mimosa pudica or M. pigra which are problematic in grasslands and various crops.

When touched, the leaves of Mimosa fold quickly and the species are also called "sensitive plants". Other features are the thorns on the branches and the usually spherical clusters of small flowers.