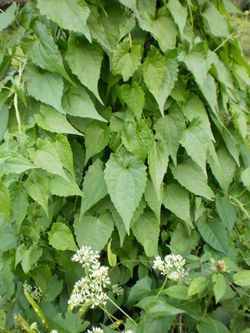 
The species is a climbing weed which has become a serious problem in various crops, e.g. in plantations of tea, rubber and oil palms, or in forests, winding around stems and branches. It can completely cover and “suffocate” a plant. Hempweed is native to Central- and South America, but is now widely distributed around the world in tropical and subtropical regions. It is particularly invasive in wet and warm areas of eastern Asia, where it had been deliberately introduced in some places as a ground cover.

A single plant can produce between 20 and 40 thousand seeds per year. The seeds have a tuft of white bristles and disperse easily by wind. The vine can expand 8-9 cm in one day and can also root from the leaf nodes. Apart from herbicides, tree planting is recommended as the weed does not thrive in shaded environments.

M. micrantha is a highly branched perennial vine with heart-shaped leaves, 5-15 cm long. It has green petioles as well as small and numerous white to greenish-white flowers, produced in groups of 4. The internodes of the stem are 10-20 cm long. The black seeds are 1½-2 mm long and the pappus 2-3 mm.