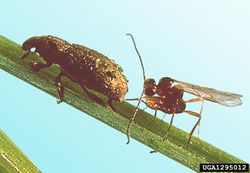 The wasp is a solitary, parthenogenetic parasitoid of the adult weevil which first sterilizes its host, overwinters in the host and then kills it when the mature larva emerges for pupation. It is native to South America and has been introduced into New Zealand as a biological control agent against the weevil Listronotus bonariensis. It became established in 1991.

About 5 years after its introduction, the parasitisation rates reached 75-90% in some seasons and this was accompanied by a decline in the host population. However, monitoring over 25 years indicated that parasitism rates eventually declined substantially, due to weevils becoming resistant to the wasp (Tomasetto et al., 2018).