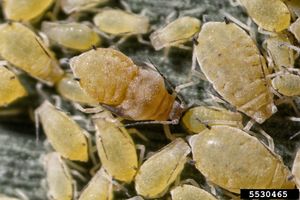 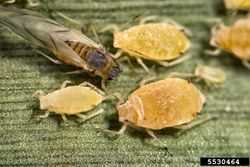 The aphid attacks sugarcane and sorghum in various regions. It also infests other cereals like maize as well as grasses. Damage results from direct feeding and causes stunting, yield losses and reduced crop quality. On sorghum, feeding produces reddish spots and later necrosis, yield losses of more than 50% have been reported. The development of sooty molds, due to the excretion of the aphids, has been associated with high populations. In addition, it is a vector of several sugarcane viruses like Sugarcane yellow leaf virus.

M. sacchari is widely distributed in tropical and subtropical regions including Asia, Africa, Australia/Pacific and South America. Since 2013 it has been also reported from the southern United States.

In outbreak populations, females propagate by parthenogenesis and give birth to live nymphs. The life cycle from birth, through 4 nymphal stages to adult may be completed in less than 2 weeks. Winged forms are produced intermittently and disperse. Drought appears to promote outbreaks.