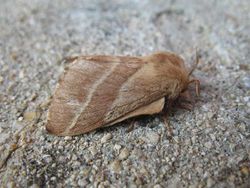 This moth species is found in north-eastern North America where it feeds mainly on the leaves of Rosaceae like Prunus species. The larvae can defoliate trees and their bristles cause skin irritations.

Females lay a single egg-mass in the summer and first instar larvae remain inside the eggs until the coming spring in diapause. They then hatch in a synchronized manner during bud burst. The caterpillars live gregariously and construct a silken tent for protection. The development of the larvae is completed in around 6 weeks. The last instar larvae disperse and eventually pupate in cracks of the bark. The adult moths do not feed and live only for a few days.