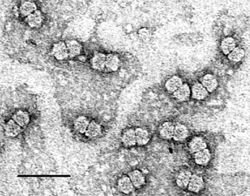 The virus causes an important maize disease in sub-Saharan Africa which can result in crop failure. Diseased plants show pronounced chlorotic streaks along the veins, severe chlorosis on the young leaves, stunting and poor ear formation. It is transmitted by leafhoppers of the genus Cicadulina. Management relies on resistant maize cultivars.

The particles have a double (geminate) structure and contain a single-stranded, circular DNA genome with about 2.7 kb. Various variants of the virus have been described which differ in their virulence.