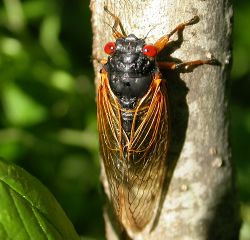 This species of cicada is found in north-eastern parts of North America. The larvae feed on the roots of various trees or grapevine and have a 17-year life cycle, ending with the synchronised mass-emergence of the last instar nymphs from the soil and moulting to the adult stage.

Although the adults only live for about 1 month, they can cause more visible damage than the nymphs, due to their mass-appearance. For example, females use their ovipositors to create holes ("nests") in the branches for laying eggs. High infestations may result in branches wilting and dying off.