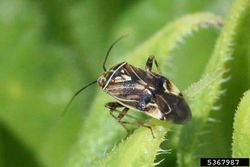 This bug is a important pest of cotton in North America, causing abortion of terminals and shedding of squares/bolls. Vegetables, and many other crops are also attacked. Yield losses in cotton can reach 30%. In other crops, the bugs feed on the buds, flowers and developing fruits, resulting in deformation of the shoots and fruit abortion.

Due to its large host range, the insects can reproduce on various hosts through the year. Often, high populations develop on weedy hosts which then invade cropping areas.

Insecticides against this pest are applied up to 7 times per cotton season and pesticide resistance has become a serious problem. The development from egg, through 5 nymphal stages, to mature adult lasts around 1 month. There are 2-3 generations per year and the adults of the last generation overwinter.

The adult is 5-6 mm long. The colour is variable yellowish to brown with darker marks. The scutellum has a yellowish, Y-shaped mark. Nymphs are greenish.