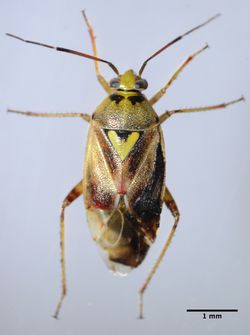 This bug is common and wide-spread in North America where it attacks a large variety of crops, including cotton, fruits, vegetables, alfalfa and even conifer seedlings. It feeds on the shoots, buds and developing fruits, causing deformations, scars and fruit abortion. On cotton, L. hesperus is considered to be one of the most important pests. The bugs feed on the floral buds (squares) causing them to drop from the plants. Significant damage can be caused by feeding on young bolls, as much as 30% lint yield losses has been estimated, although the average loss is small. The costs of yield losses and for control in cotton was estimated at US$ 37 million in 2002.

As the bug has a wide host range, weeds are often the source of infestations. The bug also moves between crops, e.g. between alfalfa and cotton. Dispersal has been estimated at around 10 m per day (Bancroft, 2005). The development from egg, through 5 nymphal stages, to mature adult lasts around 6 weeks. There are 2-3 generations per year. The adult can enter diapause and overwinters in leaf litter or under the bark of trees. For management, removal of preferred weed hosts is recommended. Pesticides are commonly used, but natural enemies like parasitoids are important and can be affected by insecticides.

The adult is 5-6 mm long, light brown with darker as well as more yellowish marks. The labium is always reaching the base of the abdomen. Overwintering adults are dark brown. The nymphs are yellowish green.