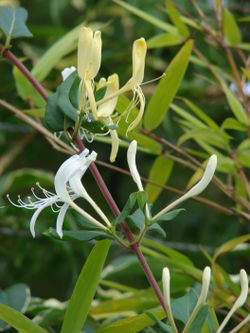 This species is a semi-woody climbing vine, native to Asia, with white or light yellow fragrant flowers which has been introduced into many regions as an ornamental. For example, it is often used as a fence cover. It has become a serious and aggressive weed in several tropical and temperate countries where it threatens natural ecosystems. The vine grows and climbs into small trees and shrubs forming dense mats and thickets and overwhelms the native vegetation.

In tropical regions it is evergreen, but leaves drop off during the winter in temperate regions. L. japonica disperses by seeds, underground rhizomes and aboveground runners. The fruits are eaten by birds which spread the seeds from gardens into natural habitats. The stems of the plant are typically 2-3 m long but can grow to a length of more than 10 m. The leaves are ovate and the plant produces black berries, each containing 2-3 small dark seeds, about 2-3 mm long.

In some areas, the sale and distribution of L. japonica is prohibited. Once established, it is difficult to control. Careful monitoring and early eradication of new infestations is the recommended approach.

Cutting and burning will only control the weed temporarily because it will resprout from its rhizomes and from cut branches. Therefore these methods need to be repeated and combined with the application of herbicides, preferably during cold periods.

For details see the respective page in the BugwoodWiki and the review by Larson et al., 2007.