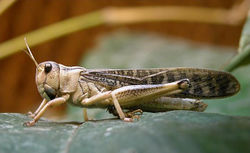 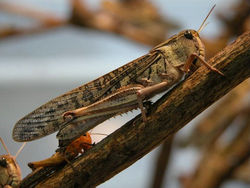 The locust is an important pest in Africa and Asia. It is also found in Australia and the southern parts of Europe. Many crops and other plants are attacked but damage to cereals is usually economically most important. Locust swarms invading crops are known since historical times, but in some regions, the migratory locust has lost in importance over the centuries after some of its traditional breeding grounds were transformed into agricultural land. For example, locust swarms are no longer invading parts of Europe from their breeding grounds in Russia.

When breeding conditions become suitable after rains, the locust switches from the solitary to the gregarious phase and forms swarms which can travel long distances in order to find food and new breeding places. Both phases show considerable differences in morphology and behaviour. The swarms fly in the direction of the wind at a speed of 15-20 km per hour, covering 100 km or more per day. Control is usually directed at treating the marching hopper bands (flightless immature stages) in the breeding areas.

Because it is relatively easy to rear, this species has become a model insect for physiological laboratory studies. The gregarious adult is 3-6 cm long, light brown with darker marks. The female lays an egg pod in moist soil from which up to 100 first instar hoppers hatch after about 3 weeks. After going through 5 nymphal stages, the hoppers molt to adults after 1-2 months.