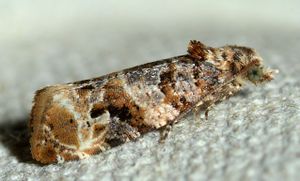 The moth is an important pest of grapevine in Europe and neighbouring regions, especially in warmer and drier areas and also attacks currant, plum and other fruits. It has been been reported from parts of California, U.S.A. since 2009 and is under quarantine in that area. Further it has spread to South America (first record 2008). It is also found in parts of Asia.

The larvae feed on the buds, grape flowers and developing berries, causing direct damage and predisposing the fruits to infections by grey mould. For control insecticides and pheromones are used. The development from egg to adult lasts around 6 weeks in spring and summer. There are 2-3 generations per year and pupae of the last generation overwinter.

The adult has a wingspan of 12-15 mm. The colour of the forewings is mottled light and dark to reddish brown, usually with two grey to greyish-green bands across the wing. The apical band typically forms an X or inverted Y.