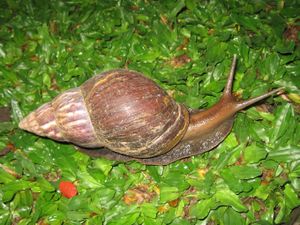 This snail is native to Africa, from where it spread to Asia, the Pacific and other tropical and subtropical regions. For example, it has been recorded from Brazil since the 1980s (e.g. see Thiengo et al., 2007) and from parts of Florida, U.S.A. since 2011 (Smith et al., 2013). It has been often deliberately introduced, e.g. as a source of food, and has become a major pest of vegetables and ornamentals. In addition, it is regarded as a vector of Angiostrongylus cantonensis which can also infect humans. Further, it is an ecological pest, replacing native species.

The snail is highly polyphagous and an individual lives for 3-5 years with the shell growing up to 13 cm long. It produces more than 1,000 eggs during its life-time. Eradications have been attempted after several introductions and have been successful in a few cases. For example, an earlier introduction into Florida in 1966 was eradicated within 10 years. Efforts using metaldehyde pesticides are still ongoing in Florida to eradicate the more recent 2nd introduction.