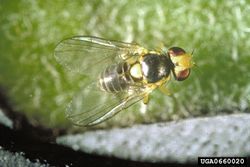 The leafminer fly is a highly polyphagous and attacks various vegetables like tomato, celery or bean as well as ornamental plants like chrysanthemums, particularly in glasshouses. It appears to be native to eastern North America, Central America and northern South America. However, it has spread to various other regions and now has a nearly world-wide distribution, e.g. it is recorded from China since 2005. The life cycle from egg, through 4 larval stages, to mature adult lasts around 3-4 weeks under warm conditions.

Extensive mines on the leaves cause premature leaf drop, yield reduction and an entry point for plant diseases. On ornamentals, any form of damage is unacceptable. Control is mainly done with insecticides, but pesticide resistance has been a problem. As the leafminer has also many weed hosts, removing weeds can help.

The adult is smaller than Liriomyza huidobrensis, the body being less than 2 mm long and the wing length 1½-2 mm. The colour is mainly yellowish below and on the head, while it is black to grey dorsally on thorax and abdomen, with some yellow parts.