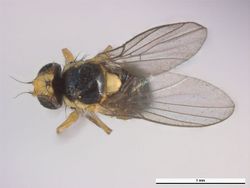 This leafminer fly is a widely distributed, highly polyphagous pest. Originally described from South America, it is also common in Central and southern parts of North America. Since the 1980s, it has been recorded from tropical and subtropical parts of Asia (e.g. first record from China in 1993), the Pacific, Africa, and Australia (first record in 2015). In Europe it can survive in greenhouses.

L. sativae mines the leaves of a large variety of plants, including many plant families and crops like vegetables and ornamental nurseries. For management, the use of pesticides should be avoided, since it leads to the suppression of natural enemies and repeated outbreaks.

The adult flies are externally identical to several other species of Liriomyza and need to be identified by the structure of the male genitalia.