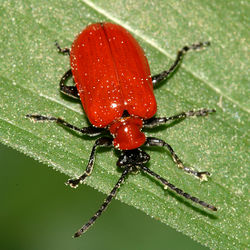 This leaf beetle is native to Europe and northern parts of Asia. It has been introduced into North America, probably through the importation of ornamental lilies from Europe and was first recorded in Montreal, Canada in 1943. Apparently, there was a second introduction of the beetle, resulting in its establishment in Massachusetts, U.S.A. (first record in 1992). For the invasion history, see Dieni et al. 2016.

L. lilii is now widely distributed in the north-eastern parts of North America. The beetle has become a serious pest of lilies with the feeding activities of the larvae often causing complete plant defoliation, often leading to plant death.