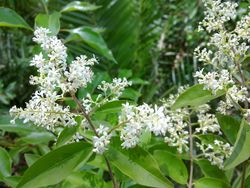 This shrub is native to south-eastern Asia, but has been introduced as an ornamental into other regions and has become invasive in several countries. For example, it was introduced into the southeastern United States around 1850 and has now spread to most parts of the south-eastern U.S. as well as to north-eastern and south-central parts, with scattered populations in western U.S. It often invades wooded areas, forming dense thickets that suppress native vegetation, and affect forest regeneration as well as wildlife (Cash et al., 2020).

The shrubs grows to a height several metres. The leaves are around 5 cm long and about 2 cm wide. The flowers are small (4-5 mm) and white. They are arranged in groups of several hundreds on panicles. The fruits are small black berries.