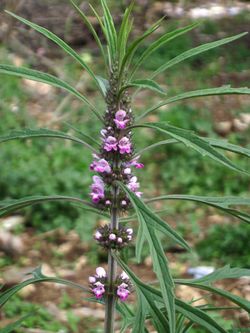 This plant is native to eastern Siberia and neighbouring areas, but has been introduced into other regions as a medicinal herb. For example, it has become established in various parts of South and Central America, where it affects the growth of crops like coffee or cereals (e.g. see Ronchi & Silva, 2006).

The plants grow to a height of around ½ m with an erect and angular stem, covered with bristles. The leaves are narrow and deeply lobed. The flowers are usually reddish and arranged in whorls around the upper part of the stem. The fruit is a schizocarp that holds 4 seeds.