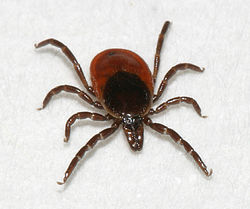 The tick is an important vector of human Lyme disease, babesiosis, human granulocytic erhlichiosis (HGE) and other human and veterinary pathogens. It is found in North America, mainly in the eastern states. The tick has various vertebrate hosts, primarily small mammals like mice, but frequently bites humans. It can also be found on a large range of other terrestrial vertebrates from deer to birds to reptiles.

It is the most important human tick parasite in North America and infection rates with Lyme spirochetes often exceed 25% (affecting an estimated 300,000 people annually). Management efforts involve personal protection like avoiding areas with high tick infestations or the use of repellents and proper clothing on the legs. In addition, ticks are directly controlled on deer and cattle or through burning.

The larval and nymphal stages parasitize mainly small mammals, whereas the adults are common on deer. The feeding duration is 3-5 days, after which the ticks drop off for moulting. After the moult they wait for a new host. Female adults feed for about a week and then drop off for overwintering. Egg laying occurs early in the spring and the whole life cycle extends over 2 years.

The adult is around 3 mm large (unfed) and dark brown to black with the abdomen lighter brown to orange-red.