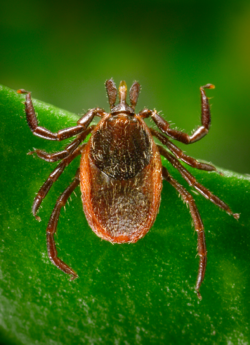 The tick is found on the western coast of North America and is an important vector of the Lyme disease spirochete. It is also considered a vector of Erlichia equi. It is typically common in forest environments like dense oak woodland. Larvae and nymphs feed on small vertebrates like rodents and the lizard Sceloporus occidentalis, while adult ticks bite mainly deer. Humans are usually accidental hosts.