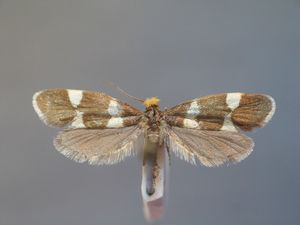 The family of Incurvariidae contains around 100 small, primitive moths. The females have a strong, pointed ovipositor with which they can pierce leaves or fruits. They are usually leaf miner or bore into fruits, at least as first instars. The later instars may have a different life style. Some species are regarded as pests like the jarrah leafminer, Perthida glyphopa, which attacks some species of eucalypts in Australia. The wings are typically dark and brownish with some light marks.

The family of Prodoxidae contains around 80 species and has been previously included as a subfamily under the Incurvariidae. It is covered here and is represented by the currant shoot borer, Lampronia capitella.