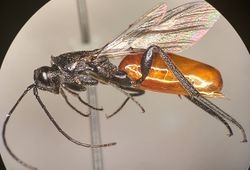 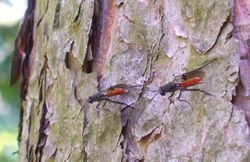 The Ibaliidae is a small family of wasps under the Cynipoidea that are parasitoids of woodwasp larvae (Siricidae). Adult Ibaliidae can be up to 3 cm long and the species often have characteristic colour markings. The long ovipositor can reach the host larvae inside the wood, but if not in use is completely retracted and folded inside the abdomen of the female.

Ibalia leucospoides is a solitary endo/ectoparasitoid of Sirex larvae, as well as some closely related species. It is widely distributed and especially important for the natural biological control of the invasive and destructive European woodwasp, Sirex noctilio. While it has probably spread to some areas with S. noctilio, transported in infested wood, it has been also introduced deliberately into some countries like New Zealand. Rates of parasitism as high as 40% have been recorded in some woodwasp populations. Initially, I. leucospoides lives inside the host larva, but becomes an ectoparasitoid once it has reached the 3rd instar stage.