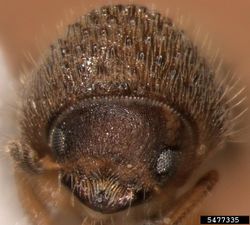 The bark beetle breeds in the branches of mango trees, causing shot hole symptoms. It is native to south-eastern Asia, but has spread to other regions like tropical and subtropical parts of America. It is considered to be a vector of mango diseases like mango wilt or mango sudden decline, caused by Ceratocystis fimbriata.