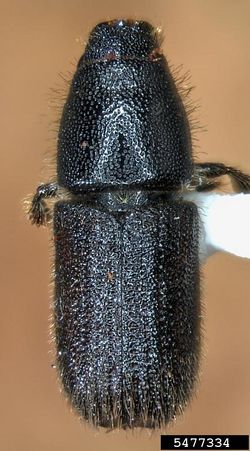 This bark beetle attacks the roots and trunks of pine trees. It is native in Eurasia and North Africa, but has been accidentally introduced into other regions. For example, it has been recorded from southern Africa, Australia and New Zealand (since 1974), as well as from the Americas (recorded in North America since 2000). The beetle attacks mainly moribund or recently cut trees, and breeds in the inner bark. Pine seedlings can be killed by the adult beetles feeding on the bark. They can also introduce plant pathogenic and lumber-degrading fungi into the trunks during attacks.

There are typically 2 generations per year. The adults are around 5-6 mm long and dark brown to black.