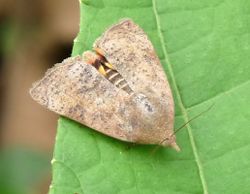 This is a small family of around 40 species of moths which are mainly found in the Indo-Australian tropics. Some authors place the family under the Pyraloidea. The adults have a medium size with a wingspan of around 3-5 cm. The coloration of the forewings is mostly brownish but the hindwings can be colourful.

The larvae are leaf rollers and leaf feeders. Some species of the genus Hyblaea are pests of teak trees (Tectona grandis) like the teak defoliator, Hyblaea puera. That moth is native in southern Asia and northern Australia, but has been also reported from several countries in Africa as well as South and Central America.