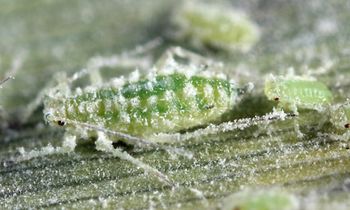 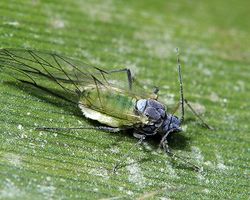 This aphid is widely distributed around the world. The main hosts are Prunus species where it lives on the shoots. It is an important pest of plums and also infests almonds, apricot or peach. High populations may develop, causing leaf curling, a reduced growth of the shoots, as well as fewer and smaller fruits. Secondary hosts are grasses of genera like Phragmites, Elymus, or Arundo.

H. pruni has a holocyclic life cycle and overwinters on Prunus in the egg stage. The nymphs emerging from the eggs develop into wingless females (aptera) which reproduce through parthenogenesis once mature, giving birth to live nymphs. Populations build up through several generations in spring and early summer. In the summer, winged forms appear that disperse. They may then migrate to a secondary host (grasses), but in other populations, only Prunus species are infested. After additional parthenogenetic cycles, winged males and females (alates) are produced in autumn. These mate and lay the overwintering eggs on Prunus.

The mature wingless female is around 2 mm long and green, mottled in different shades of green and covered by 'mealy' wax secretions. In the summer, on grass hosts, also reddish brown forms can appear. The winged forms have a dark head and thorax, also covered by wax secretions, and a greenish abdomen.