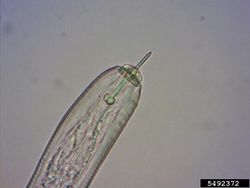 The family contains root parasitic nematodes, but also some marine species. They are mainly ectoparasitic on roots or semi-endoparasitic. Economically important pest species are for example Helicotylenchus dihystera or the Columbia lance nematode, Hoplolaimus columbus.

The family is related to the Rotylenchulidae and both families have been treated previously as subfamilies. Important morphological characters include a well developed stylet with basal knobs, about 2 x as long as the body width at the lip region, a short tail in females and the esophageal glands overlapping with the front end of the intestine.