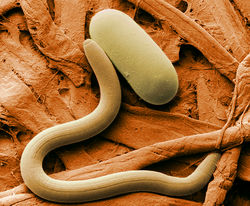 The species is a very important pest of soybean in the Americas and Asia, causing a reduced root system, root necrosis as well as chlorosis and stunting of the plants. Yield losses up to 50% have been estimated and losses can occur even if no above ground symptoms are visible. The economic losses in North America were estimated at US$ 40 million for 2013.

The nematode may also infest some other crops like beans. After hatching from the egg, the J2 juvenile bores into a root with its stylet and infests the vascular system. The female swells and eventually becomes a lemon-shaped cyst, approximately 1 x ½ mm large and completely filled with eggs. The development from root penetration to mature cyst lasts 2-3 weeks.

The life cycle may repeat itself several times during a cropping season. Under unsuitable conditions, the cyst can remain in the soil for several years while the 1st and 2nd larval stages develop inside the eggs. They leave the egg when they are stimulated to hatch through the presence of host plant roots.

Annual rotation of soybean with maize is the most commonly practiced control method. Resistant soybean varieties are also available.